10 Places to Enjoy S’mores in Orlando 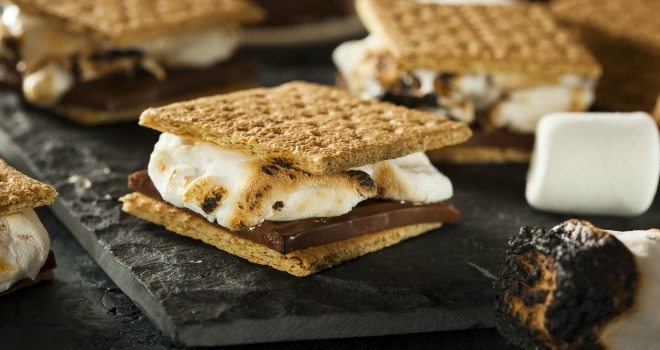 The dog days of summer bring back youthful memories of summer camp and roasting marshmallows to create sweet, sticky s’mores. In honor of National S’mores Day on August 10, forgo the camp out – because less is s’more – and, instead, date night at one of these hot spots for luscious variations of the classic campfire treat! Feast on signature burgers, like the Chicago Stockyard (peppercorn, Parmesan-blue cheese, mushrooms, romaine, onion, tomato, Worcestershire sauce) or the Fried Louie (bacon, cheddar, fried egg). But, since this urban bar made a name for itself with martinis, cocktails and a dynamic beer selection, order dessert in liquid form with the S’mores Martini, a flawless blend of Absolut Vanilla, Godiva Chocolate Liqueur, toasted marshmallow & chocolate syrups, cream, marshmallows and a graham cracker rim.

It would be a sin not to order dessert at this place! Sinfully indulge with Toasted Marshmallow S’mores Galore, a whopping slice of Hershey's cheesecake topped with chocolate ganache, toasted house-made marshmallow, and Honey Maid graham crackers. One of Orlando's most jaw-dropping luxury resorts, the Four Seasons isn't afraid to flaunt its casual side at PB&G, the resort's lakeside restaurant. Enjoy lots of delicious small bites, from ahi tuna poke to lobster rolls, then finish the feast off with tableside s'more's complete with several types of chocolate. This neighborhood staple boasts live music, a full liquor bar and a massive jar of dill pickles (instead of peanuts or chips). Nibble on smoked fish dip, pita pizzas, an array of sandwiches and fun DIY S’mores. Complete with all dessert ingredients, use the roasting sticks to perfectly toast marshmallows over a small hibachi-style flame. Beer aficionados will appreciate the 100+ taps and an ever-changing chalkboard of the latest and greatest brews from around the corner and around the world. Since the kitchen requests 15 minutes to perfectly toast its S’mores Brownie (chocolate brownie with graham cracker crust and roasted marshmallows), wet your palate with a well-paired beer such as Due South Caramel Cream, Kasteel Barista Chocolate Quad, Miami Big Rod Coconut Ale or Young’s Double Chocolate Stout.

Ever wondered where marshmallows come from? Find out at the Wondermade Workshop when you'll get to tour the Wondermade kitchen (aka the hippest marshmallow making establishment anywhere), enjoy drinks and treats, participate in a Q&A session with an official marshmallow agent and learn to cut and decorate your own marshmallows! Oh, and order up a box of S’mores Marshmallows to taste a superb chocolate, vanilla and graham cracker confection without a campfire. The shop now offers an assortment of s'mores related treats, like their signature S'mores Popsicle. S’more on… Camp out at home with easy s’more recipes like this Summer S’mores Martini and Chocolate Fudge S’mores Mug Cake.