25 Fun Things to do this Memorial Day Weekend in Orlando

What’s New on I-Drive for Locals

Best of May: 45+ Orlando Events for Date Night This Month 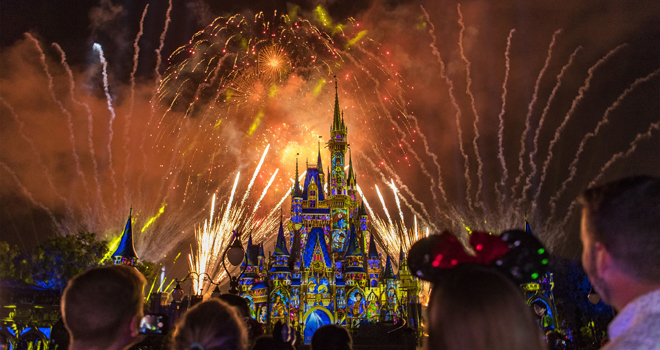 Here in Orlando, we have “The Most Magical Place on Earth” in our backyard. Walt Disney World is a magical place, and visiting such a place with our loved ones is all the more enchanting. Yet you don’t need to enter the theme parks to enjoy a memorable date with your honey. You can still make magical memories while enjoying a Disney fireworks finale, outside of the theme parks.

Currently, there are nightly fireworks displays at three out of the four Walt Disney World theme parks. We’ve compiled a list of places where you can view the fireworks without having to enter the parks, categorized by each theme park/fireworks show. Keep in mind, access to some of these locations may be restricted based on occupancy, and Disney’s policies are subject to change without notice.

Magic Kingdom area – Happily Ever After

Magic Kingdom’s fireworks are the most popular in Walt Disney World. The most visited theme park in the world welcomed a new fireworks show in May 2017 called “Happily Ever After”. This fireworks show includes new technology that makes for a visually stunning experience. While many of the effects are best seen inside the park, you can still enjoy a lovely evening in the Magic Kingdom resorts area, at multiple viewing spots.

Please note that parking at Disney’s resort hotels is officially for guests with hotel and dining reservations only. Most nights you are able to use the hotel parking lot after showing photo identification and explaining that you’re heading to the lounge or restaurant for food and drink.

The grandest of Disney’s hotels, you’ll be awash in casual sophistication the moment you set foot in this resort. The lobby is sure to make your eyes grow wide. Head to Mizner’s Lounge on the second floor, home to some of the classiest cocktails on Disney property. Or grab dinner at Narcosse’s overlooking the Seven Seas Lagoon; select tables have a view of the fireworks. Reservations are recommended. The best fireworks viewing at this resort is at the boat launch, at the rear of the resort.

Modern touches and panoramic views are the hallmarks of this resort. Head to the 4th floor concourse, where there’s lots of energy all around thanks to the monorail passing through the hotel and the vibrant food and beverage selections. The Outer Rim Lounge is tucked to the side with views of Bay Lake. For a quieter retreat, head to the first floor and visit The Wave. The easiest fireworks viewing location to access is the observation deck located on the back right corner of the 4th floor concourse. To truly elevate your experience, book a table at the California Grill, which offers firework views from select tables and its own observation deck.

***Update: Epcot Forever is a temporary fireworks show in place until the new Harmonious show launches later in 2020. Stay tuned for a formal update to this section once the new show is finalized.***
Fireworks begin at 9pm
Where to view: Disney’s Boardwalk Resort

Epcot’s longest-running fireworks show, “IllumiNations: Reflections of Earth,” celebrated its last performance in September of 2019. The current show, Epcot Forever, is a dazzling celebration of Epcot’s past, present and future. This show is on display nightly until the new Harmonious show debuts later in 2020. Harmonious is set to become one of the Disney Parks’ largest nighttime spectacular ever. Although the show is best viewed in the park, there are still a few locations in the area offering good vantage points.

Watching Epcot Forever outside of the park can be a little tricky. There may be moments you think the show is over due to a couple of lulls in the show and effects that can only be seen inside the park. It begins at 9pm and concludes no earlier than 9:12 PM.

Along the Boardwalk, enjoy live performers as well as a wide variety of dining locations, lounges, sweet shops, and even a few midway games. During non-peak times, you should be able to park at Disney’s Boardwalk Resort without a dining reservation, but availability isn’t guaranteed. Make a dining reservation if you want to play it safe.

Another option is the bridge between the Boardwalk Hotel and the Walt Disney World Swan and Dolphin. Depending on show times, you may be able to view Epcot, Magic Kingdom, and Disney’s Hollywood Studios fireworks all around the same time from this one spot. Plus, the Swan and Dolphin is a visually unique backdrop.

Hooray for Hollywood! This park is home to two nighttime spectaculars, but only one is chock full of fireworks. “Star Wars: A Galactic Spectacular” is a dream come true for any Star Wars fan. Combining fireworks with projection technology and other effects, this show is enveloping when viewed inside the parks but still brings excitement to those viewing from outside the park.

Visit Disney’s Beach Club and head for Beaches and Cream’s to-go window to indulge in ice cream, sundaes, and shakes that you can take to the resort’s beach and catch glimpses of “Star Wars: A Galactic Spectacular” fireworks.

If you’re in the mood for a stroll and a closer view, walk along the path the extends toward Disney’s Hollywood Studios, in between Disney’s Boardwalk and the Swan hotel. This walkway will take you up to the entrance of Disney’s Hollywood Studios. Stand back along the water and face the entrance of the park. Here you can see the fireworks up close and hear the music and sounds of this galactic spectacular.

If you’re feeling in the mood to indulge a little, consider dining at Capa, the rooftop steakhouse located at the Four Seasons Resort on Walt Disney World property. Here you’ll catch views of fireworks not only at the Magic Kingdom but other area theme parks as well. Or you can grab a cocktail at the Capa Lounge and enjoy the view. You can also see the Walt Disney World fireworks from the rooftop restaurant, Eleven, at Reunion Resort. Get a bird’s eye view by boarding the Characters In Flight Helium balloon at Disney Springs. Soar above Disney Springs with views of nearby Epcot, plus Magic Kingdom and Disney’s Hollywood Studios in the distance. Fireworks can be viewed while aboard the Characters in Flight Balloon, however, there is no way to guarantee your boarding will occur during the fireworks time. We recommend checking with one of the operators near the balloon’s loading dock to see if they can assist you with this; if the attraction is not too busy they may enable you to wait to the side until it is time to board around fireworks show time.

Check out the fireworks before retiring to your room when you book an overnight stay at a non-Disney hotel with fireworks views.

Westgate Town Center Resort is a hidden gem for couples whose weekend staycation ideas run toward hitting the theme park area for a night of love, lights and wonder. The resort boasts first-class fireworks field-of-view from its perfect location (and multi-story viewing elevation) just off 192! Featuring every room imaginable, from studios to spacious suites, the full-service resort has long stood as the top pick for locals looking for hotels in Kissimmee Florida near Disney that have theme park proximity to the night skies over Disney, without the price tag of park entry (especially after the recent rate hikes on Disney properties and resorts). Rates tend to hover around $99/night even in the summer (if you Advance Purchase on it).