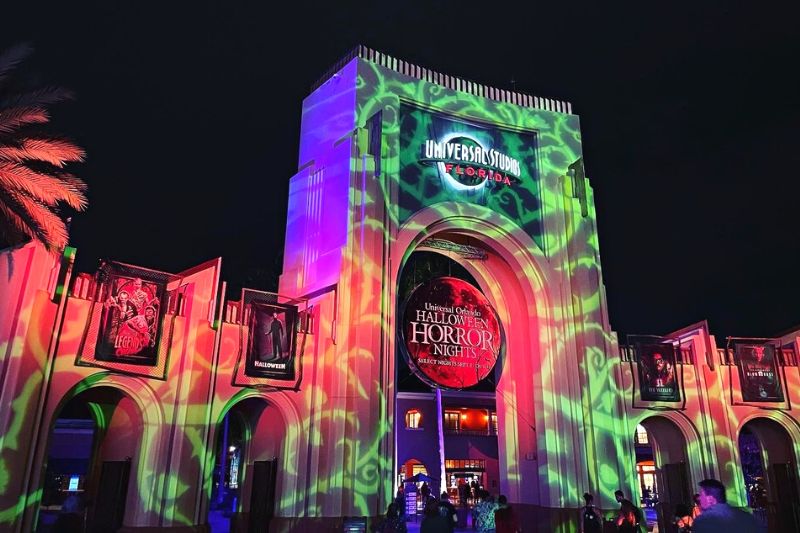 In its 31st year, it is the perfect time to celebrate all things Halloween. So the overarching theme for Halloween Horror Nights 2022 (HHN31) is Halloween itself.

10 houses have been announced for Halloween Horror Nights 2022. Including 4 based on movies and pop culture:

Read on for our guide on making the most of a date night, or should we say dare night, at Halloween Horror Nights 2022.

Note: Admission to Universal Orlando's Halloween Horror Nights is NOT included with regular park admission. You will need a separate event ticket in order to attend. Also, parking is NOT free until after 10pm, so be prepared to pay full price.

The headlining houses are worthy of the buzz, but you won't get the full experience if you overlook the incredible scare zones, shows, and original concept houses. Be sure to review the full list of Universal Orlando's HHN houses, scare zones, shows and rides in advance.

Focusing just on the Halloween Horror Nights houses can sometimes lead to disappointment due to the long wait times. Plan out 3-4 must see houses, including at least two original concept houses (ones that aren’t based on a movie or TV show). The original concept houses tend to have shorter wait times and the Universal Orlando's creative design team has more freedom with HHN house designs.

TIP: The original concept houses tend to have shorter wait times, especially early in the evening and towards the end of the night. “Dead Man’s Pier: Winter’s Wake” has received great reviews early on, definitely put this one on your list.

The spooky scare zones feature intricate themes without the wait times and the enclosed space of a house. Many repeat guests cite the scare zones as their favorite part of HHN. There are five scare zones for 2022.

You'll be greeted to Halloween Horror Nights 2022 with the “Horrors of Halloween” scare zone, featuring The Pumpkin Lord. “Sweet Revenge” with its parade theme is the most fun scare zone and you may find yourself wanting to go back through a few times. It's in the New York Area.

There is also an elaborate and impressive stage show featuring fire, pyro, and aerial performances at Halloween Horror Nights returning this year. Halloween Nightmare Fuel makes a hot impression and offers a place to sit for a bit and be entertained together.

The lagoon show is rethemed for 2022. This new show follows the Grim Reaper on the undertaking of what happens beyond the grave – all set to eerily-remixed music by some of today’s most iconic artists.

Who knew water fountains and projections on water could give you goosebumps? You may want to cuddle together for this one. This larger-than-life show takes place in Universal Studios’ lagoon using projection technology, fireworks, lasers, and a killer soundtrack.

How to save time at Halloween Horror Nights

The lines for the most popular Universal Orlando HHN houses can get as long as three hours, with average wait times around at least an hour or more for popular houses based on movies and TV shows. Alternatively, the original concept houses are full of detail and unique experiences, and tend to have lower wait times – not a bad Halloween Horror Nights shortcut!

Halloween Horror Nights officially kicks off at 6pm on most nights and generally runs until 1am. Take breaks, enjoy the experience, and show those scary fiends they are no match for the power of love!

If you have regular park admission to Universal Studios Florida for the day as well as for Halloween Horror Nights that night, you won't be required to exit the park and come back in for HHN. You’ll just need to head to one of the holding areas.

For this early admission option, you must enter the park before the official park closing for the day.

After about 45 minutes to an hour from park closing, the holding areas are opened up and at least one house in the immediate area will be available to experience with little to no wait.

It is wise to map out the event ahead of time and determine which part of the park has one or two houses you want to see the most so you can utilize the proper holding area. You should be able to get through one house right away and then get in line for your next house with little wait time.

The alternative to early admission is the Halloween Horror Night's Express Pass – and it is going to cost extra. The prices range from $89.99 all the way up to $159.99. The question always is “is it worth it?” And there’s no easy answer to that. Will you get through more houses in less time? Yes. Will it eliminate all waits at all the houses completely? Not so much.

“We always splurge and get the Express Pass. It’s double the price but so worth it. Definitely hit all the houses you really want to see first, then enjoy the rest. The Killer Klowns scare zone is the absolute best!!!!!!” – @mustangcaryn

If you're able to splurge, Universal offers a special R.I.P. Tour where you'll join fellow fans on a guided VIP tour of Halloween Horror Nights 2022. The tour includes VIP entry to all houses along with other perks. R.I.P. tours begin at $299.99/person and require separate event admission. If you can swing it, this is a pricey but fun way to ensure you won't have to wait in line and will be able to see all of the houses.

I recommend visiting Halloween Horror Nights on a non-peak night (such as a weeknight and in September or early October) and that you take advantage of early admission if eligible. It is also recommended that you enjoy the scare zones and shows and a ride or two to get the full value of your event ticket.

Over the years the good people at Universal Orlando have learned that special events require special food and drinks. The Halloween Horror Night food and beverage should not be overlooked. There are multiple food and beverage kiosks throughout the park.

Some of the food and beverage offerings for 2022 include:

Kill your thirst with these cocktails:

Take a break from the horror to ride some rides. Some of Universal Studio's top attractions are open during HHN. This is a great way to experience rides with very low wait times and without having to pay regular park admission.

Pro-tip: Type the code “666” into Hollywood Rip Ride Rockit for a special spooky song to play while you're riding this roller coaster.

Talk about your HHN comfort level

Perhaps one of you is more enthusiastic about being scared. Perhaps you're both a little hesitant. Or maybe you're both brave and ready to face the Halloween Horror Night scare zones and dark, loud houses together. Whatever your tolerance level for scary stuff may be, it is best to get it out in the open upfront. This way you're both on the same page and prepared to be supportive of each other if needed.

It is fun to push yourself and conquer your fears, but you also don't want to end up making each other uncomfortable without realizing it. The best way to have a date night at Halloween Horror Nights is to be supportive and understanding of each other’s comfort level.

Take note of the location of your must-see houses and scarezones. Start in the back of the park and work your way back to the front.

Consider making your trip to HHN an overnight getaway. Universal Orlando has a great variety of resorts that are perfect for couples. Cabana Bay Resort offers a “Universal Monsters Gallery of Legends” – featuring a collection of immersive photo opportunities inspired by the terrifying trio of Universal's classic Monsters that guests will face at the event – The Mummy, The Wolf Man and Dracula.