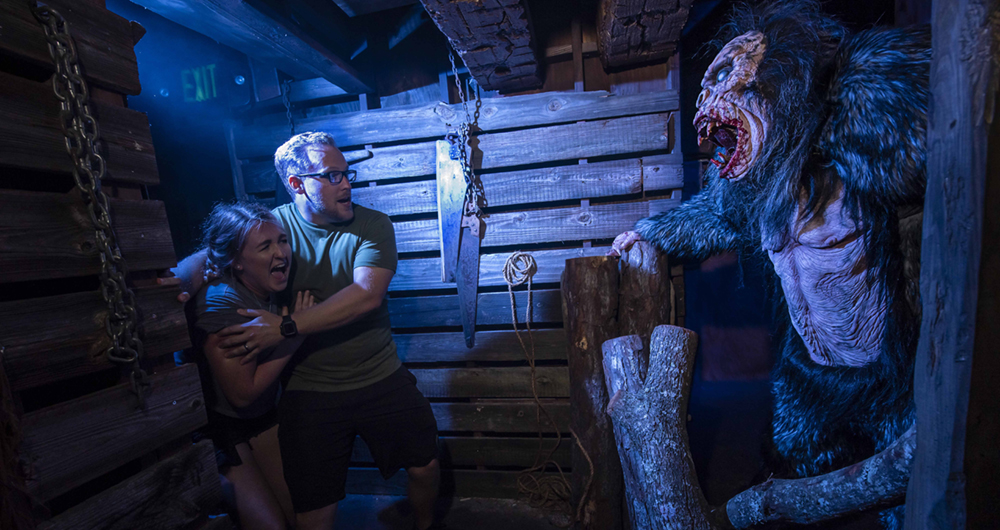 Now that we adults have grown up from dressing as our favorite comic book character to get candy in return, it's time to get scared! Whether that's by watching a classic scary movie or attending a haunted attraction, I can't help but look for the next thing that is going to terrify me for a few days. These chilling tours and haunted houses in Orlando will make October even spookier!

10 houses have been announced for Halloween Horror Nights 2022, including four based on movies and pop culture:

The Weeknd's music videos will serve as inspiration for The Weeknd: After Hours Nightmare house, but taken a step further.
The house will have three main scenes:

Plus, six original haunted houses and five scare zones, including “Graveyard: Deadly Unrest” and “Horrors of Halloween”, and more.

Our guide to Universal Orlando's Halloween Horror Nights – Orlando includes the full lineup, tips to save time, and date ideas.

Select nights from October 6 through October 29, 2022 (delayed start due to Hurricane Ian)
1360 E. Altamonte Dr., Altamonte Springs
$31.98 for all three trails,  $47.98 for VIP including three trails and a backstage tour

What separates this haunted house from its counterparts? For starters, this haunted house features outdoor trails in the woods where you never know what will be lurking around the next corner. This year’s theme is Nature's Fury, with each trail incorporating the theme in various disturbing ways.

A Petrified Forest offers backstage tours every night they’re open (the only Central Florida haunted attraction to do so) so you can see what it takes to be part of the attraction. In addition, they offer special days for various guests. Saturday, October 9 is Kids Day, filled with trick-or-treating, a costume contest, and other fun games. Wednesday, October 13 is a private event welcoming everyone with special needs to attend and experience the trails. Patrons are allowed to go at their own pace with help from staff.

Finally, if you’re into absolute terror, October 20 and 27 are Total Eclipse Nights, nights where you’re only given one glow stick as you journey through the trails with no other source of light. Eek!

TIP: Since this attraction is outdoors, be sure to wear clothing and shoes that aren’t expensive and can get dirty.

Howl-O-Scream returns for its second year in Orlando in 2022. Explore themed scare zones, brave haunted houses, ride your favorite coasters in the dark. – including the brand-new Ice Breaker Coaster.

Check out live Halloween-themed performances, including a new show “Lurking in the Deep: An Adventurer’s Tale” and more. The multiple-themed bars are a major highlight – liquid courage!

Note: Howl-O-Scream is a separately ticketed event and is NOT included with regular theme park admission. Spring for a 2-park pass for $99.99 which will also get you access to Howl-O-Scream at Busch Gardens Tampa Bay on a separate night.

Scream n' Stream's Haunted Drive & More is in its third year and is moving to The Florida Mall. This is a drive-through haunt that offers scare zones, corresponding music and scare-actors that approach your windows as you drive through six Scare zones in the maze.

The theme this year is a play on ‘90s horror movies and you drive through the movie screen when you begin.

You can purchase your tickets online per person that is in your car, which is new this year. On the day of your event, you will park and check in at the haunted lobby and wait for the text that says you’re ready.

Once ready you’ll drive to the entrance of the maze, the attendants will give you directions and you’ll start your experience. The lobby also offers additional add-on experiences, at an extra cost, including tarot card readings and a bloody painting. There are also a couple of photo ops including Bloodbuster, (oh dear Blockbuster, how us older millennials miss you).

Overall it’s super silly and may be good for anyone afraid of the more intense spooky events.

Mortem Manor allows you to get your scares all year long, not just during October. Located in Kissimmee, this year-round haunted house was named one of the “Scariest Haunted Houses In America” by the Travel Channel. Your tour will take you through two stories of the manor. Don’t worry about any creaks you hear while walking around, it’s just the house settling.

Once you’ve made it out alive, you can experience what your final ride in life would be like with The Last Ride. This is a coffin burial simulator that takes you through the sounds and smells of a casket ride to the graveyard.

Warning, this year is different! The Haunted Road – Human Slaughterhouse Edition includes a 25-minute drive down an all-new route of The Haunted Road to witness spine-chilling phantom sightings. At the end of the road (if the ghosts allow you to get that far), guests can park their vehicle to walk through a human slaughterhouse and then enjoy a chilling Afterlife Party.
$19.99

This year, SCREAM-A-GEDDON is back to haunt guests with bone-chilling and personalized experiences, as well as numerous upgrades to the park’s Monster Midway including brand new food and beverage options.
In addition to these park enhancements, SCREAM-A-GEDDON will offer six fan-favorite haunted attractions including last year’s debut of the terrifying house, Bloodwater Bayou as well as interactive elements including roaming sinister characters and more.

Sir Henry once operated a carnival long ago. Since his passing, he has been seen putting together his trails and attractions, ready to haunt the lives of those who enter his property. You can experience three outdoor haunted attractions at Sir Henry's Haunted Trail. Each trail has its own backstory, from a rich family of vampires hosting a grand ball to feast on the victims to a ghostly captain exacting his revenge. Tickets must be purchased in advance for the 2021 season. This event benefits Folds of Honor. Check out more haunted happenings in the Tampa Bay area.

Step right up and see the strange and scary acts of the Killer Carnival. You will go on a guided tour of a horror filled side show where the act's stories are told through illusions and scares. Tours last about 10 minutes and are given between 7PM and 11PM in groups of 8 or less. Proceeds benefit The Center Orlando whose mission is to promote and empower the LGBT community.
Tickets can be bought in advance for $12.00 per person.

Once you escape the twisted maze, watch out for terrifying surprises and dangers at every turn. Clowns and spiders are plentiful. Beware of the undead…it is rumored that a mad scientist has kept his lovely wife’s head alive in the hopes of one day finding her a new body! This will be the 44th year the Sorosis Club of Orange City has held a haunted house and the theme changes every year. As an added bonus, proceeds benefit local children in Orange City.

50+ Events to Celebrate Halloween in Orlando Did we miss any? Be sure to submit your event here: orlandodatenightguide.com/submit-an-event.